This article, written by the Museum’s curator Beth Boyce, appeared in the March 2019 edition of Musings, the Museum’s newsletter. 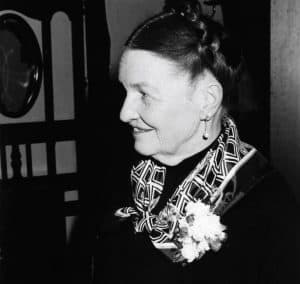 Ann Elmore Haig-Brown did not enjoy the spotlight.  Though married to a public figure, the author, conservationist and magistrate Roderick Haig-Brown, she did not seek recognition for her own work.  Kevin Brown, responsible for the restoration of the Haig-Brown House, wrote, “Whereas Roderick was often better known outside the community for his writing and conservation work, Ann’s work was largely felt within the community.”

Born in Seattle in 1908, she was given the advantage of a university education. She worked at Hartman’s Bookstore in Seattle before marrying her great love, Roderick Haig-Brown, in 1934, and moving to the small community of Campbell River. Theirs was a true partnership. She raised their four children while fostering several others, and operated a small farm, raising cows, chickens and sheep, as well as cultivating a large vegetable garden and fruit orchard. Through the 1960s and early ‘70s she worked at the local high school as a teacher/librarian.

In addition, she donated her time to several community organizations.  She served as president with the local PTA, was a founding member of the Catholic Women’s League, worked with Women’s Place, the Voice of Women peace activists, and was a sponsor for Campbell River Parents in Crisis.

Perhaps her most influential role was in her operation of a safe house. For decades she quietly sheltered women and children fleeing abusive relationships.  At times she would have several people staying with her either in the cottage, or in the bedrooms upstairs in her home.  Ann was very discreet, never sharing anyone’s names or the reasons for their stay.  Friend Van Egan noted, “There was a strong connection between Rod’s work as a magistrate and Ann’s work looking after people in trouble. I know of at least one person who Rod dealt with in court and Ann dealt with afterwards.”

After the sudden death of her husband in 1976, Ann became even more involved in the community.  She added working with the John Howard Society, the University Women’s Club and the Transition House and several other social justice causes to her already busy schedule.  Ann was tireless in her community work.

Paul Barnett noted that in his work with her at the John Howard Society she “had a very pragmatic approach to how society should deal with both victims and offenders… She had a natural understanding of justice and was ahead of her time in recognizing best practices.”

Although she worked quietly, not wanting to draw attention to the work she was engaged in, the people working with her had other ideas.  In 1988 the new Transition House in Campbell River was named the Ann Elmore Transition House in her honour.  At the time she quipped that it was easier to help a sister in need than to write a speech.

Other groups to honour her include the University Women’s Club who named their bursary the Ann Elmore Haig-Brown Memorial Bursary. The award is given every year to a young woman in Campbell River pursuing a university education. Ann was made a lifetime member of the John Howard Society, the only person so honoured. The Museum’s annual Haig-Brown Memorial Lecture is held in honour of both Roderick and Ann’s legacies, the lecturers focusing their talks on environmental conservation and social justice issues. Finally, in 2008, the City of Campbell River declared her birthday, May 3, to be Ann Elmore Haig-Brown day in honour of her impact in the community.

Her daughter Valerie noted, “My mother was considered by many to be a remarkable woman, for her brains, her energy, and her organizational ability.”

Ann passed away in June, 1990. Approximately 200 people from all walks of life attended her funeral service, and the line of people getting up to speak about her influence on their lives seemed endless. At the time Bill Piercy, president of the Transition Society said, “She would have been one of the last people to tell anybody the things she did, but if anybody in this community should be eligible for canonization, it’s Ann Haig-Brown.”