The Cowichan Sweater has become a symbol of coastal living.  Stretching out from the small valley where they originated, Cowichan sweaters have been, and continue to be, a kind of uniform for those living and working in the damp coastal rainforests and waterways of the British Columbia Coast.  Did you know there was a local connection to the industrious knitters of these classic pieces of knitwear?

Every summer the Salish knitters and their families would arrive at Cape Mudge to fish for salmon.  And every summer, they would travel to Hudson’s Farm in North Campbell River, to purchase wool from the sheep being raised by Tom and Mavis Hudson.  You see, specific breeds of sheep produced the best wool for the sweaters, and black wool in particular was difficult to come by.  The Hudsons raised Suffolk sheep, and usually had a flock of about forty ewes, one third of which were black.

Many Campbell Riverites are familiar with Hudson’s Farm, which still operates as a family-run farm in North Campbell River.  The logged off land was purchased by Tom Hudson in 1924. The farm continues to be maintained by Tom and Mavis’s children.  Their son, and his wife, still raise Suffolk sheep.

Diana Kretz, neé Hudson, remembers Salish knitters driving up to the farm to purchase wool in the 1950s when she was a teenager.  They would examine the wool, teasing apart the fibres to be sure of its quality, all the while speaking in their language. They were looking in particular for the black wool needed for the designs. Keith Hudson remembers that members of the Louis family would regularly come to purchase the wool, and that in the 1940s, Mrs. Assu and others would paddle over from Cape Mudge in their canoes to purchase wool for knitting Cowichan sweaters.

One of the Hudson family’s most prized possessions is the Cowichan sweater knit for Mavis by the women staying at Cape Mudge from the wool raised at the farm. She is seen wearing it in this photo taken with her good friend Sybil Andrews.

Sybil, the famous artist, also took a keen interest in the sheep raised at the farm.  She regularly took her art classes to the farm for field trips to sketch and paint the landscape and farm activities.  One of her famous linocuts, Fleece, shows the stages of shearing a sheep, which she developed from sketches of Tom Hudson doing just that.

The archives at the Museum are filled with historic photographs of locals and visitors wearing their Cowichan sweaters.  Do you have a favourite, well-loved Cowichan Sweater?  It’s sweater weather!

Ode to the Cowichan Sweater

In accents clear and bold

No garment suits us better

For working in the cold

While water pipes are frozen

While wood piles melt away

That trusty garb is chosen

When buckling for the fray

For though it show rotunder

The over portly form,

That sweater is a wonder,

To make the blood run warm.

Oh, cherish, wear and guard it,

Refuse to have it washed,

All hints that we discard it,

Indoors may to be squashed.

So thank you, wooly baa lamb,

For yielding us your fleece.

Thank-you who’er you are ma’am,

Who first removed the grease.

Who carded, span, and knitted,

With labour and with art,

About a grateful heart. 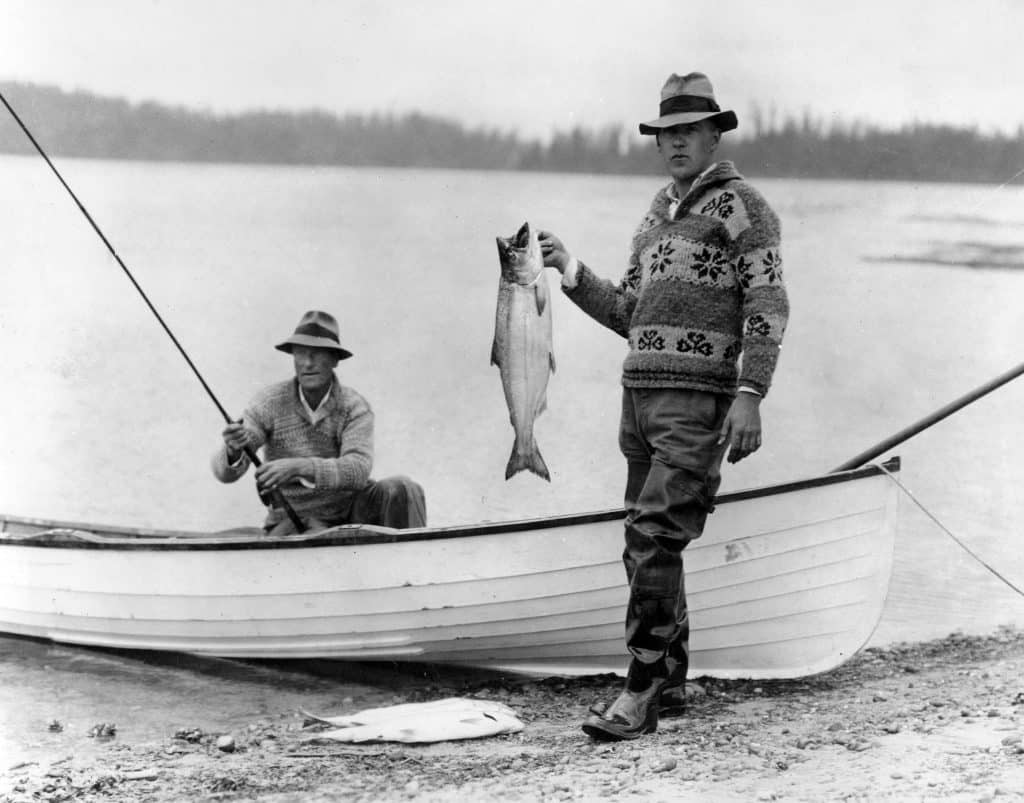