October 1986 will probably go down in history as the year of Campbell River’s greatest prank.  It was the year that Les Antonelli and Steve Pitman decided to give Big Rock a Hallowe’en makeover.  With the help of 8 other people, three sewing machines, 238 garbage bags, and a mile of sewing thread, this Campbell River landmark was transformed into a giant jack o lantern.

The rock was surveyed by Darrell Enger and Steve Pitman, who determined from the height and circumference that the cover would need to be 70 feet by 72 feet.  Next, the team spent $100 to purchase the materials they needed.  After exploring a few options, they decided to sew together orange garbage bags.  Three machines took 22 hours to sew the bags together.  Two rope cans were wrapped in green garbage bags to be the stem at the top of the pumpkin.  Then, in the dead of night, a crew of dedicated pranksters climbed on the rock and carefully lifted the cover over it.  The installation took about 90 minutes.  When Campbell River awoke the next morning, they were greeted by a smiling orange Big Rock.

In an editorial by P. Brian LePine, he says “It will take some doing to come up with Halloween trick to top this one.”  It’s been 32 years, and the challenge has yet to be met. 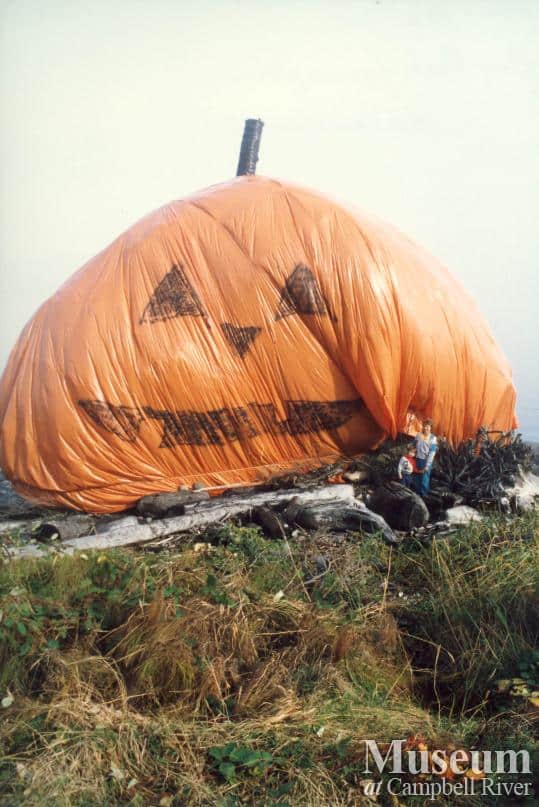