When thinking about the ‘official’ history of Campbell River, and the stories that are most often told, I think of several things.

For me, the deep indigenous history in this place, ƛ̓əmataxʷ, immediately comes to mind. The thousands and thousands of years that people have been living and thriving in these territories, building intensive, large-scale salmon weirs and fish trap complexes to harvest in the estuary, and large fortified communities to raise their families. Of course, the descendants of these peoples are still a major force and an integral part of our community today.

I think too of the big trees and big fish that drew European and Asian settlers to these territories to harvest and profit from. These industries which started in the late 1800s on a small scale, with hand loggers falling trees directly into the salt chuck, and hand liners paddling in the passage, grew to include huge camps and international companies who employed thousands. Even today, Campbell River’s identity is often tied to its forestry and fishing industries.

There are of course, other stories of this place. Today I’d like to explore the story of one family and their history in this place we call Campbell River. Their story was brought to my attention after a Look Back article published in the Campbell River Mirror focused on the history of naming in our community.   They wished to share the story of the road named for their family, the Masters, and how the road has been disappearing as Campbell River has grown.

When looking at the experiences of the settler families that came to Campbell River, Quadra Island, and the other communities in the North Island region, a common thread emerges. These families, often from England, purchased or pre-empted land (usually already logged) in order to establish family farms and reproduce a little piece of England. After some years of hard labour, while failing to make ends meet or get ahead, these families began turning to other industries to either supplement, or in some cases replace, their farms. They turned to logging, fishing, trapping, guiding, prospecting, the list goes on.

For Frank and Anne Masters, this pattern was reversed, they started out in forestry and later switched to farming. They met when both worked for the Cameron Logging Company in 1916. Anne Connell was the camp cook. In 1917 they were married and began their family. In about 1920, when the Logging Company was moving out of the district, the Masters acquired 100 acres of the land that had just been logged to establish their farm, named Rahe’en for the village in Ireland where Anne was born. 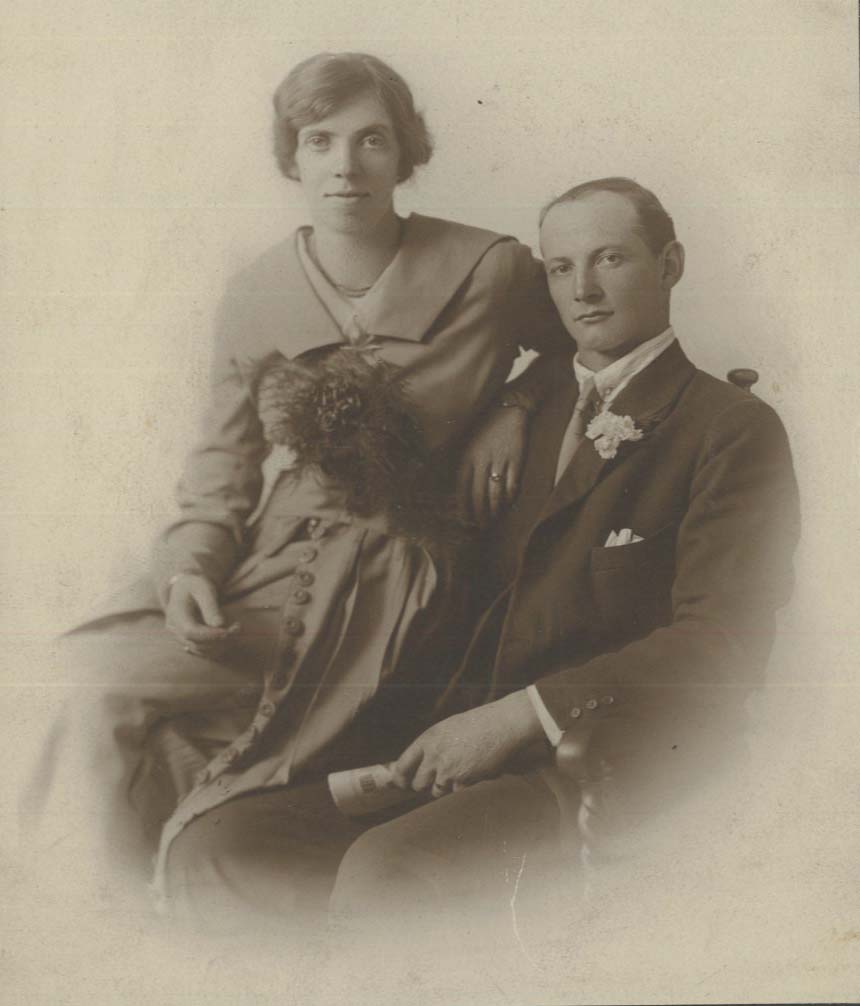 A newspaper article published in the Comox Argus on October 27, 1932 recounts in detail how they faired.

After twelve years of intensive, hard work, Frank and Mrs. Masters have forty acres of land cleared and planted this year; forty acres that has given them eighty tons of hay and fodder and sixty tons of mangels and other root crops.

Besides the forty acres, Rahe’en is the home of twenty head of cattle, the cream from which goes to the creamery at Courtenay every day… Fifty sheep help with the revenue of the farm. This year thirty turkeys, enough chickens for home use, and a number of animals that have cleared the mortgage on many a place – pigs – are in evidence.

Rahe’en is not an old ranch, but in [the] short time Mr. and Mrs. Masters have been on it they have made great headway. To clear forty acres of stump land in twelve years, and almost alone, is no small task. Try it.

In the end the Masters cleared and cultivated forty-seven acres of their property.

In order to access his markets, Frank Masters and his team of horses built a road out to his farm, which was located at the corner of Evergreen and Petersen Roads today. Masters was an experienced road builder, as one of his first jobs upon arriving in Campbell River was helping to build the road from town up to Forbes Landing Lodge. Simply called Masters Road, it wound through the logged off forests from the farm to the waterfront near to the wharf and the hospital. One section of his road survives today as St. Ann’s Road. 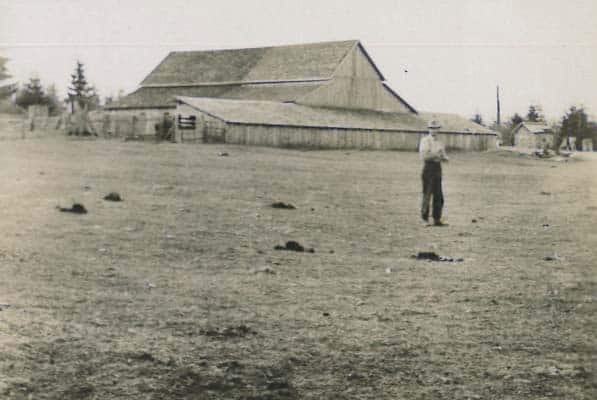 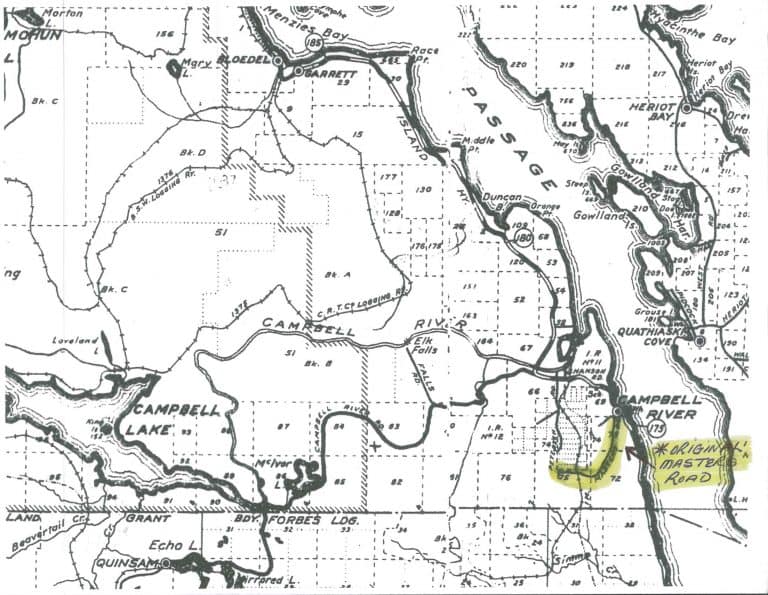 In addition to the farm, Mrs. Masters ran a popular tea house at Elk Falls starting in 1933. This little log cabin establishment was wildly popular, and feted everyone from the locals to famous Hollywood movie stars like Mae West. Old timers remember that Mrs. Masters made the very best ice cream. She was known for serving tea in real china, and all the food she served was made from fresh produce and meat from Rahe’en farm.

Unfortunately, no images of the tea house have survived, or at least none that the family, or the Museum, is aware of.  However, its colourful five-year history has been preserved in part through the local newspaper at the time, the Comox Argus. 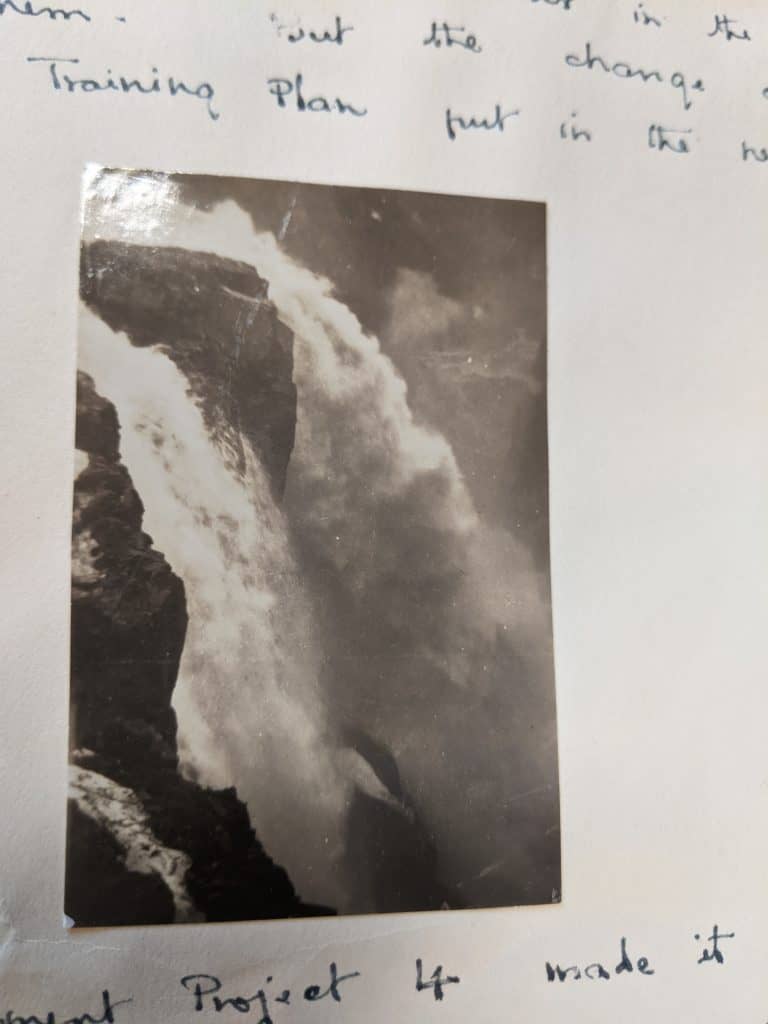 Campbell River, July 25, 1934 – Mae West and Sue Carroll, internationally known screen starts, of Hollywood, in a tour of the Island, visited Elk Falls and while there enjoyed afternoon tea with Mrs. Frank Masters last Monday.  They were greatly struck with the beauties of the district, particularly with the Falls.  It is not unusual for visitors to carry away souvenirs, but rather odd to leave them.  Mrs. Masters was given a beautiful camera as a memento of the comedienne’s visit.

Elk Falls is one of the most visited placed on the northern end of the Island, and The Den is providing for many patrons these days.  Last week Mr. C.S. Wood of Courtenay brought in Messrs. L.R. Smith of Vancouver, Gwen Smith of Seattle, L.C.R. Yuill of Vancouver and E.R. Crowe of Vancouver, and they all enjoyed Mrs. Masters’ hospitality. 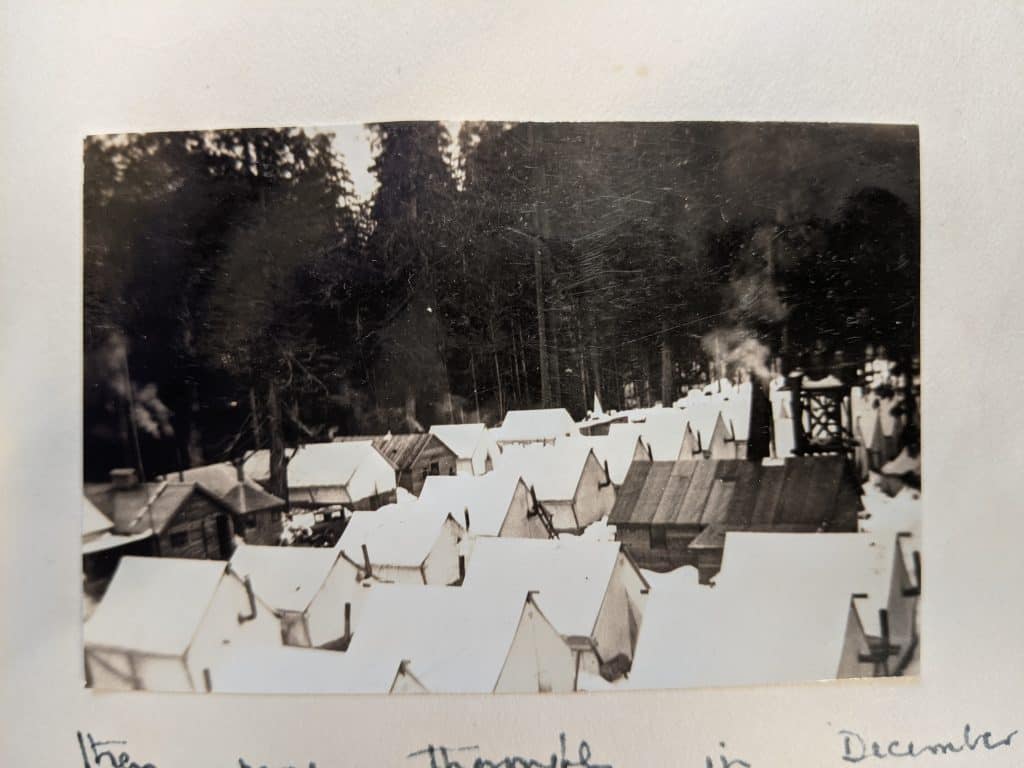 September 24, 1936: Forestry Workers at Elk Falls: Beauty Spot is Being Converted into a Real Park

The visitors to Elk Falls at Campbell River this year – and hundreds have visited them this year only- will find a busy gang transforming this lovely, but hitherto neglected, spot into a park.  It has been done under the direction of the Young Men’s Forestry Patrol, a section of Forestry work devised to help young unemployed to find something useful to do in the woods.

The great interest taken in the falls is shown by the guest book of Mrs. Masters who has a tea shop at the Falls.  The hundreds of people whose signatures are in this book come from every part of the world.  Not the least interesting is the signature of Mr. Garrett of the Campbell River Timber Company and his comment, “Bloedel missed some good timber here – too bad.”

Many visitors to Elk Falls this year will miss Mrs. Frank Master’s and her tea-room just above the Falls.  The government ordered removal of the building and it has disappeared already.  Mrs. Masters established the tea-room when the Elk Falls was a solitude untamed.  She served wonderful meals and her visitors book contained the names of many famous people, who had come to the falls from all quarters of the globe.  It is reported that the government has in prospect a lodge, modern and sumptuous.  But this year at least there will be no one to take her place.

Unfortunately, the guest book has not survived. What a wonderful snapshot of the past it would have provided.  It is believed to have been lost in a tragic housefire at the farm in 1939 which claimed the life of Frank Masters.

Following the fire, the family rebuilt the farmhouse, but in the end could not keep up with the farm, so it was sold. Anne later ran a boarding house, and remained an active member of the community.  One of her many roles included serving as secretary of the community group responsible for establishing Campbell River’s cemetery. Pat Masters has compiled a detailed family history; in it she includes many stories gathered from community and family members who remembered Anne. She wrote, “Being a lover of beer, Annie was known to frequent the Willows Hotel with her son Tom and had a special seat by one of the front windows. He often told the story that no one dared to sit in his mother’s chair when she was there.” 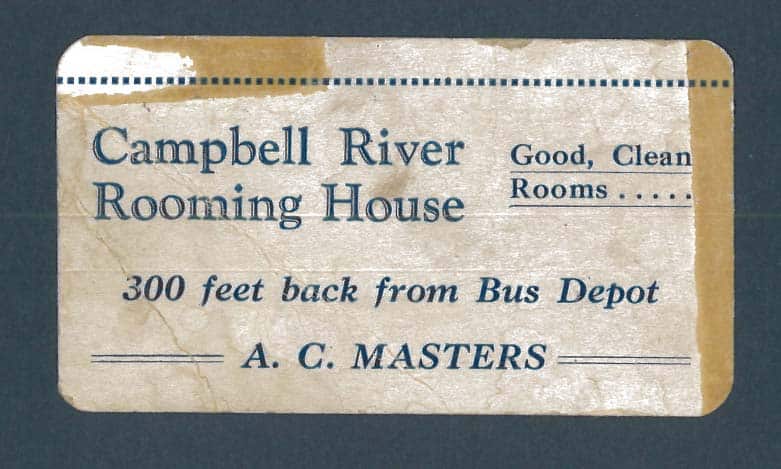 As the town of Campbell River expanded rapidly in the 1950s, the winding Masters Road was quickly swallowed by the new planned subdivisions. You can see by the progression of maps that soon all that remained was one small block, connecting to Evergreen before changing to Munson Road, which is all that remains today.

Many of the descendants of Frank and Anne Masters continue to live in Campbell River.

Do you know of any other stories of Campbell River’s past?  Are there other names in our community that you would like to learn more about?  Sometimes even the shortest of streets can reveal big stories.

Article by Beth Boyce, Museum at Campbell River Curator, with special thanks to Pat Masters for providing family photos and maps, and sharing the information she learned from her years researching her family history. 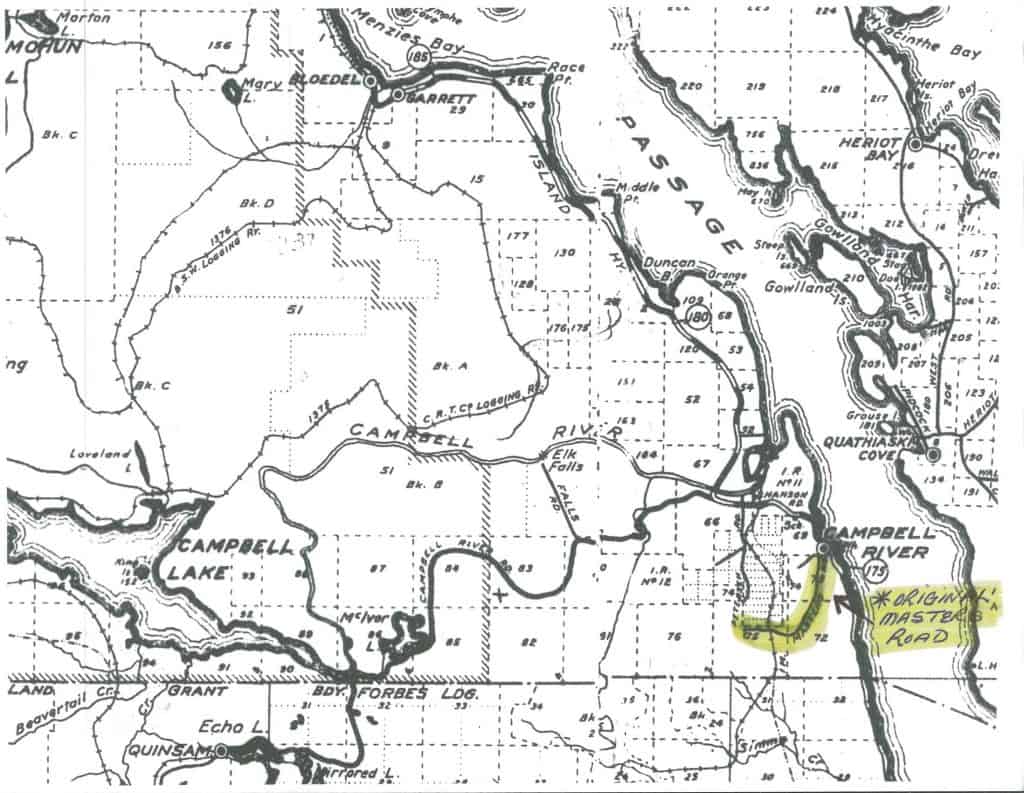 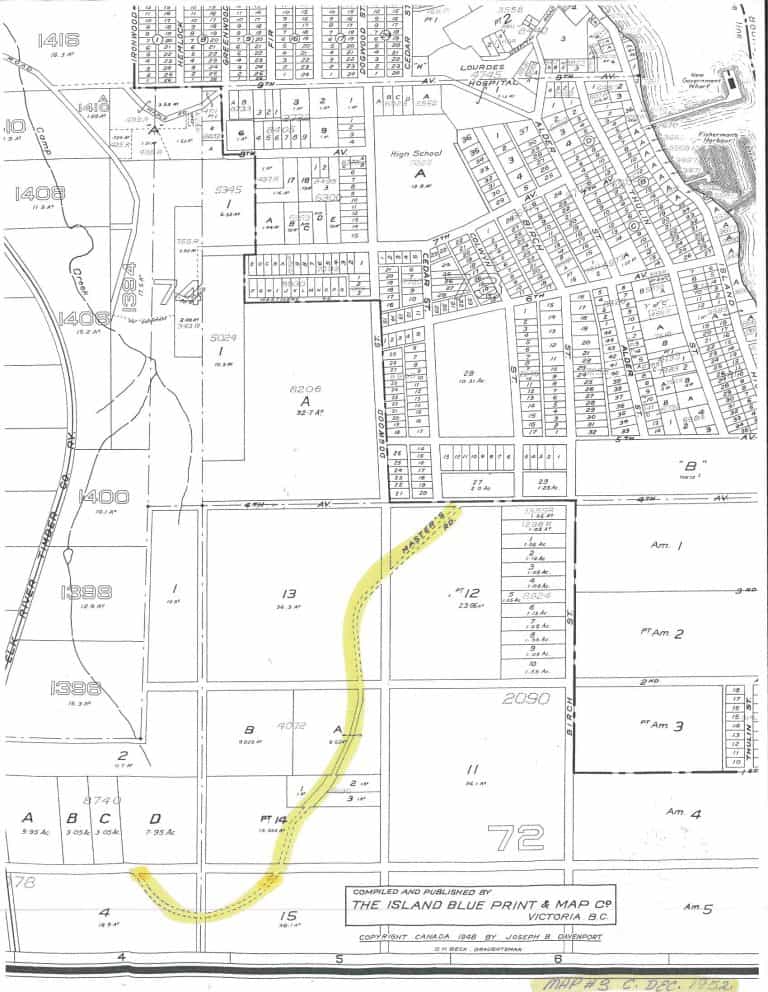 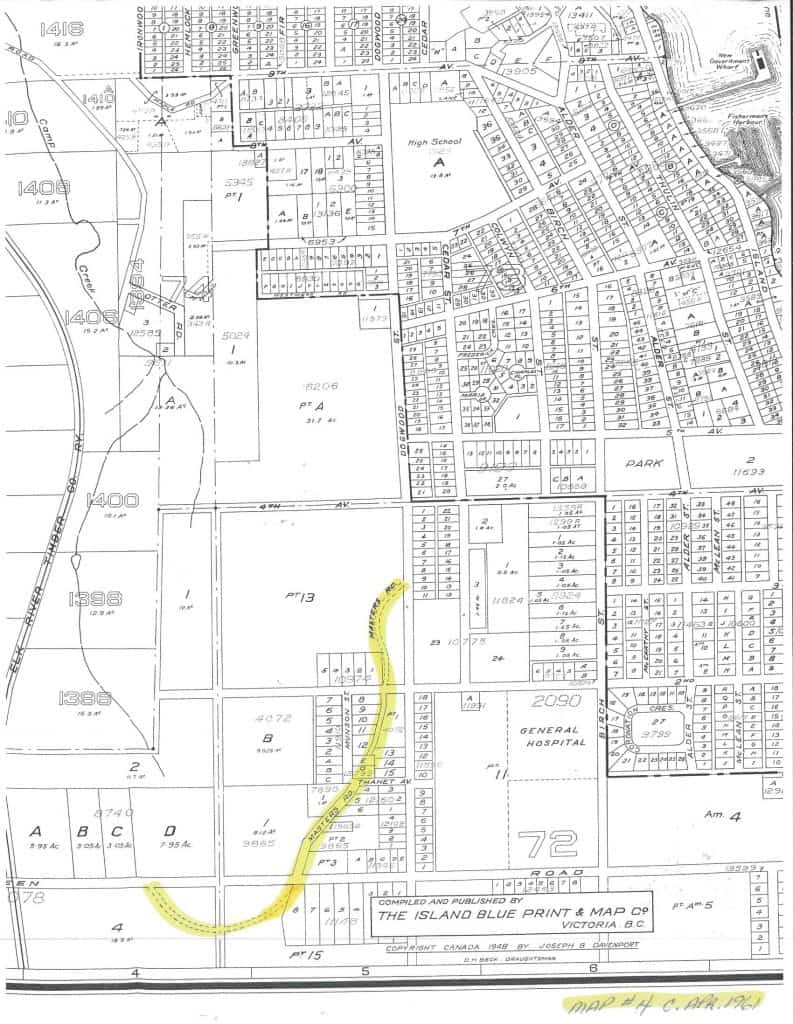 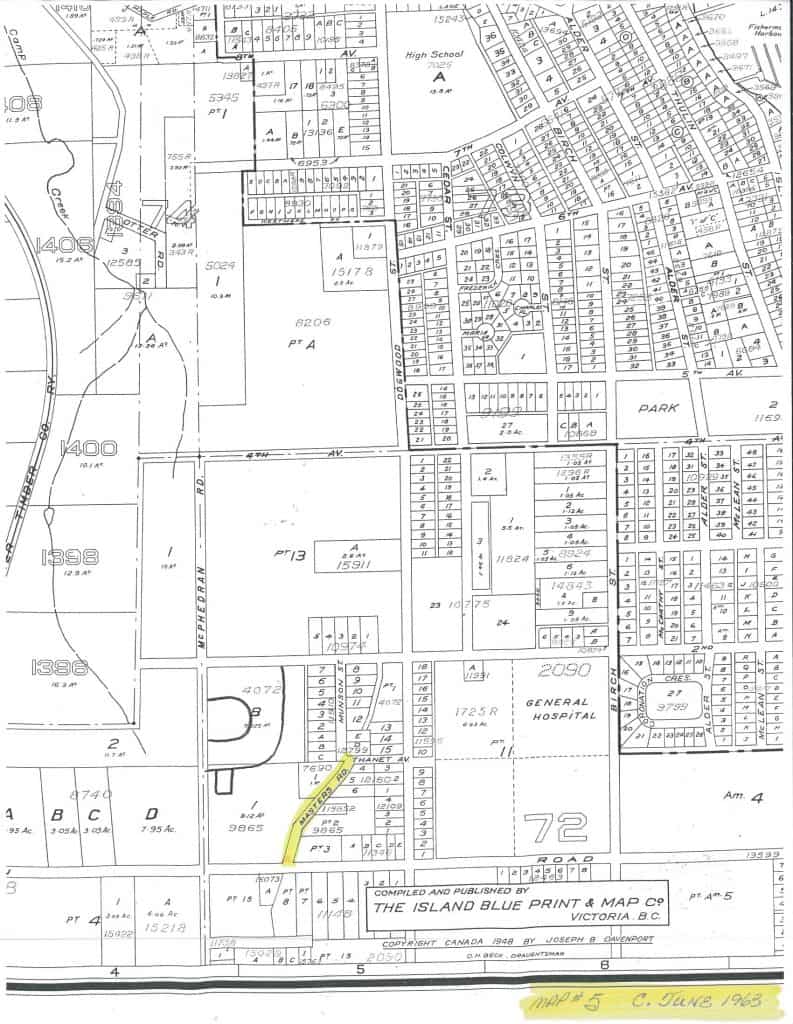