We have in the past year featured articles about the history of place naming in our community, specifically focusing on street names.  One street name that was suggested for a future article was Vanstone Road.  While in the process of researching this we came across some letters and newspaper articles touching on the naming of Mount Vanstone, and other nearby mountains after fallen soldiers.  With Remembrance Day approaching, we knew that this was the story to focus on.

In some cases, the naming of geographic places can act as a memorial.  In Canada, the practice of naming geographic features after soldiers lost at war officially began at the Geographical Names Board of Canada in the 1950s.  Names were assigned to features in the soldiers’ home province, although not always near where the soldier lived.  A newspaper article from 1978 indicated the practice of naming features using the War Casualty List continued, although as time passed tracking down surviving family members became increasingly difficult and some were not notified.

It was during this period, in the late ‘70s, that several young Campbell River men who died while serving in World War II became the namesakes for a cluster of mountains located northeast of Campbell River in the Coast Mountain Range, near the junctions of the Elaho River and Clendenning Creek. One of these mountains, Mount Vanstone, honours David William Vanstone.  Other mountains nearby include Mount Oswald, named after Flying Officer Elmer Adrian Oswald, Mount Perkins named after Private Robert Ernest Perkins, Mount Ralph named after Able Seaman George Ralph, and Mount Whiting named after Able Seaman Basil Evans Whiting.  Each of these men left Campbell River to serve their country and, in their passing, left behind loved ones and a community in mourning.

David William Vanstone was born in Vancouver in 1910. His parents were David and Eliza Vanstone, early settlers in North Campbell River.  The Vanstone name is well-engrained in the local history books, with buildings, streets, and businesses past and present bearing their name.  One of seven brothers, David grew up in Campbell River, where he started a career as a logger.  When he enlisted in the army, he had a wife, Evelyn, and two young children, Elise and David.  He enlisted on July 13, 1940 into the 2nd Battalion, 16th Canadian Scottish Regiment (Canadian Active Service Force). He was later transferred to the 4th Battalion Seaforth Highlanders of Canada and was sent overseas to Italy, where he stayed until his injury at the Battle for Ortona, and later passing at a hospital in North Africa, in 1943.

Basil Whiting was born in Vancouver on March 23, 1923 but lived all his life in Whaletown on Cortes Island.  He finished school at the age of 16 years old and worked as a logger in Whaletown for a few months before joining the Royal Canadian Navy.  Basil mainly served aboard ships in the Atlantic on convoy missions.  He served in 14 convoys before his ship, HMCS Ottawa, was torpedoed by submarine U91 off the coast of Newfoundland.  After two strikes the ship sank. There were 67 survivors recovered and 114 lost at sea. Basil was among the lost. 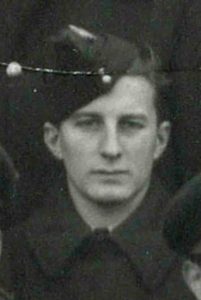 Elmer Oswald was born in Rock Bay on November 8, 1921 to Swedish parents.  The family lived in Heriot Bay, where his father worked as a fisherman.  Before enlisting. Elmer worked as a fisherman with his father, then for a few months as a logger at Menzies Bay.  He enlisted in the Royal Canadian Air Force in March of 1942, with hopes of working as a commercial pilot when he returned from the war.  His training took him all over the country before being shipped to England to serve in the 406th Squadron.  Elmer wrote home weekly.  On March 7, 1945, Elmer was killed while flying over Holland.  The letters that he sent his parents are preserved in the Archives at the Museum at Campbell River and are used in school programs to teach students about the war and about the value of archival records in looking at our history.

George Ralph was born in Vancouver in September 1923.  At the age of 14 he left school and moved to Quathiaski Cove where he supported himself as a fisherman for three years.  He joined the Navy on January 27, 1941 in Esquimalt as a Boy Seaman when he was 17 years old.  On his 18th birthday, September 23, 1941, he signed on for a seven-year engagement with the Royal Canadian Navy.  He primarily served in the Atlantic during his time with the Navy and was present on 45 convoys.  George was serving on the HMCS Valleyfield on May 7, 1944 when the ship was torpedoed by U548 in the middle of the night off the coast of Newfoundland.  The ship was rocked by explosions, split in two and sank in less than 5 minutes.  Of the 164 men on board the ship that night, 121 went missing and were presumed dead.  Twenty-year-old George was among them.  There were 38 survivors and only 5 bodies recovered. 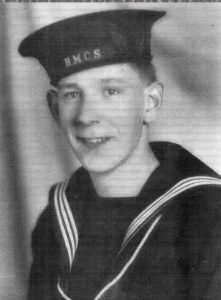 Robert E. Perkins was the son of early settlers to North Campbell River.  His father had served in the 102nd Battalion during WWI and then was stationed in Kelsey Bay during WWII.  Robert turned 19 on December 31, 1943, and a month later on February 1, 1944 he enlisted in the infantry as a general reinforcement in Vancouver.  In the fall of 1944, he was posted to Europe, where after only one month of action he was killed by a sniper on November 1, 1944, in Holland.

To find out more about Campbell River’s fallen soldiers, contact the Museum at Campbell River Archives or the Campbell River Genealogy Society.  Both have compiled research to ensure the names on our cenotaph are not forgotten.  The Museum has school programs in the Archives Research Centre focused on letters left behind by Elmer Oswald.  The Genealogy Society has a dedicated website that provides background information about the people whose names are on the cenotaph www.crgenealogysociety.ca/crgs_cenotaph/ . 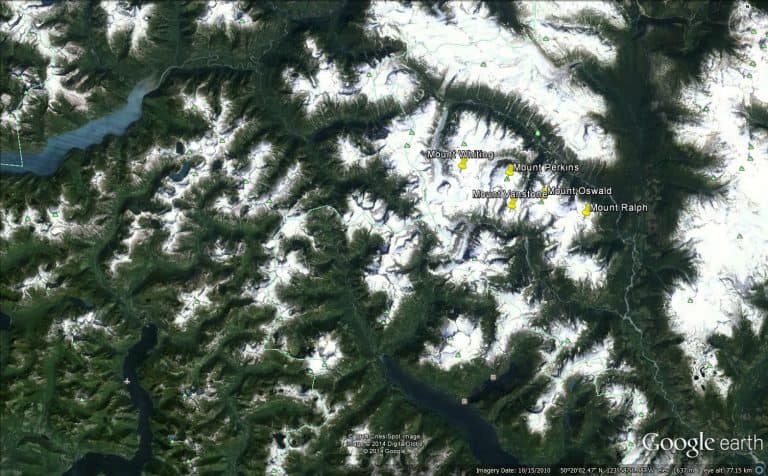