The most recent exhibition at the Museum, Cecil Dawson: Standing in the Gap, has been many years in the making.  I am not referring to Cecil’s creation of the original artworks and articles of regalia on display, nor am I referring to the articulation of the stories it was important to share alongside them.  (Although, to be fair, we have been planning and developing this exhibit for nearly a year and a half, which is longer than average for us at the Museum.)  It was the development of the relationship between Cecil and his family, and the staff at the Museum that has been many years in the making.

It all started in 1973 when Cecil’s father, Norman Dawson, came to the Museum to offer his family Copper for sale to the collection.  It was a very lean fishing year, and he needed to support his family.  Cecil says that at the time his family was “inactive,” meaning that they weren’t actively practicing their culture through Potlatch. There is more to this relatively simple statement than meets the eye.  The reason they weren’t practicing, was because Norman and Cecil’s mother, alongside most of the members of their generation, had attended St Michael’s Residential School in their youth and were deeply affected by it.  Norman had no interest in taking up his Hereditary Chieftanship, or Potlatching, perhaps making the sale of the family Copper a little easier to stomach, although I imagine it was still a very difficult decision to make.

Later in 1983, Cecil helped his father negotiate the sale of two family masks, a Dog and Mountain Goat carved by the late Willie Seaweed from Ba’as, or Blunden Harbour, a close relative.  Cecil has shared some of the reasoning that went into that decision. “I helped my dad to sell the Dog and the Goat here [Museum at Campbell River]. It was a very lean fishing year, and I was confident that I could replace them.  That makes a difference to some families, if they have the capability to replace these things.  These [old] things are really, really cool, but they aren’t as important as the ownership of them, or the right to use them.  So we sold the Dog and the Goat here.  And I replaced them.” 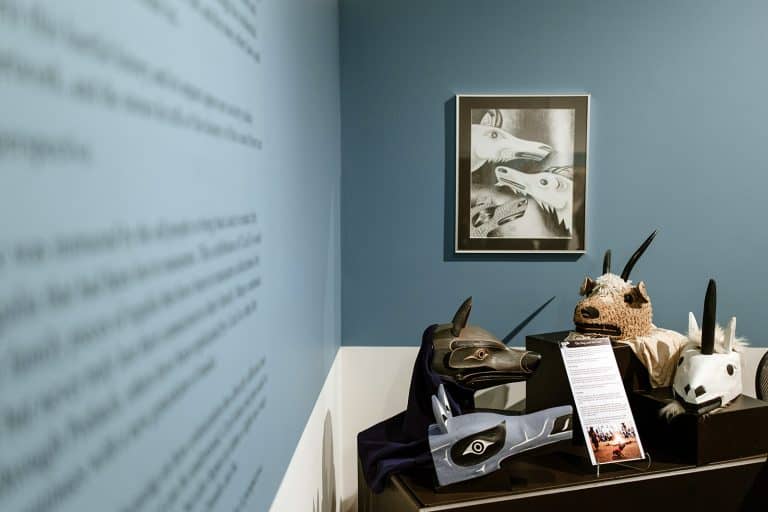 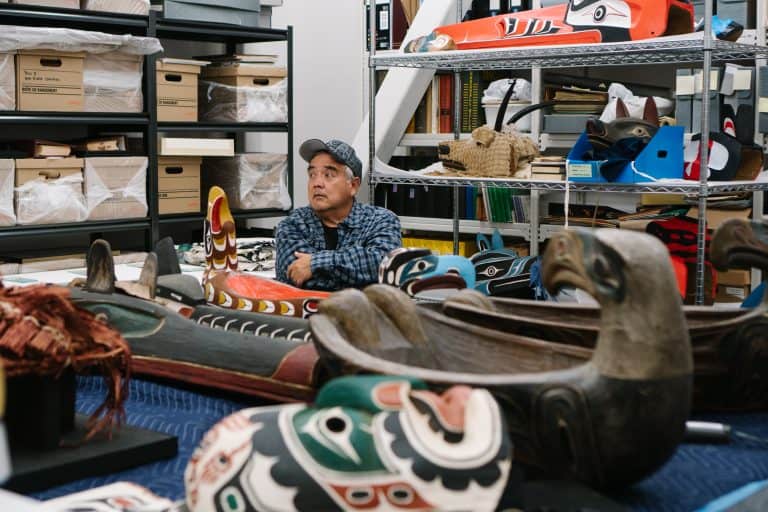 In the 1980s Cecil and his father also regularly attended lectures at the Museum, especially those exploring Kwakwaka’wakw culture. He said, “Me and my dad used to like to go to lectures at the Museum at Campbell River. [We] were pretty regular nerds when it comes to that.  They were talking about Hamat̓sa, they were talking about Baxwbakwalanuksiwe’.  I recognized those words but I didn’t know where I’d heard them before.  And something awakened in me, in that lecture.”  So, although not actively practicing, culture remained an important fixture in their lives, and the Museum played a small role in supporting that.

The relationship between the Museum and Cecil’s family did not always run smoothly.  Cecil has shared memories of times when he’s come to visit the masks and Copper, being asked to wear gloves and made to feel uneasy in this space.  He has shared that visiting his family’s articles of regalia in museums (not only this one) is akin to visiting relatives in prison.  They are trapped here behind glass and locked doors, only allowed out for brief visits, not allowed to be touched.

He also shared feeling upset when Bill Holm’s book Smokey Top: The Art and Times of Willie Seaweed [1983] was published. It was not yet widely known that the family had sold the masks to the Museum, and the family was not consulted before the Mountain Goat was included in the book. They felt outed.  To add insult to injury, Bill Holm did not agree with the family assertion that the Dog mask had also been carved by Willie Seaweed, dismissing it within the text of the book.  Who would know better about the provenance of a mask than the family who had it carved in the first place? And from a relative, no less?

When Norman’s Chieftanship was being passed onto Cecil at a Potlatch in 1995, Cecil and Norman approached the Museum about taking their family Copper out of the Museum to use during the ceremony.  By its very nature, a record of the transactions that it has facilitated, a copper cannot be replicated in the same way a mask, or other articles of regalia can. The Museum agreed, and the Copper travelled to Alert Bay. Linda Hogarth, the Curator of the Museum at the time, was asked to take photographs to document what was happening behind the scenes in the back room of the Big House, both for the family and for the Museum.  Copies of those photographs are now stored in the Museum’s archives alongside footage of the proceedings from Cecil’s more recent potlatches. Cecil’s replicas of the Dog and Mountain Goat masks have been danced at every potlatch hosted by the family since 1995.

At Cecil’s most recent potlatch in 2019, the Copper was again taken from the Museum, where it normally remains on permanent display in the First Nations Gallery, to be used in ceremony.  I was fortunate to courier the Copper to Alert Bay, and to witness Cecil’s Potlatch.  It was very special to see the Copper be used as it was meant to be, and be brought to life in the process. 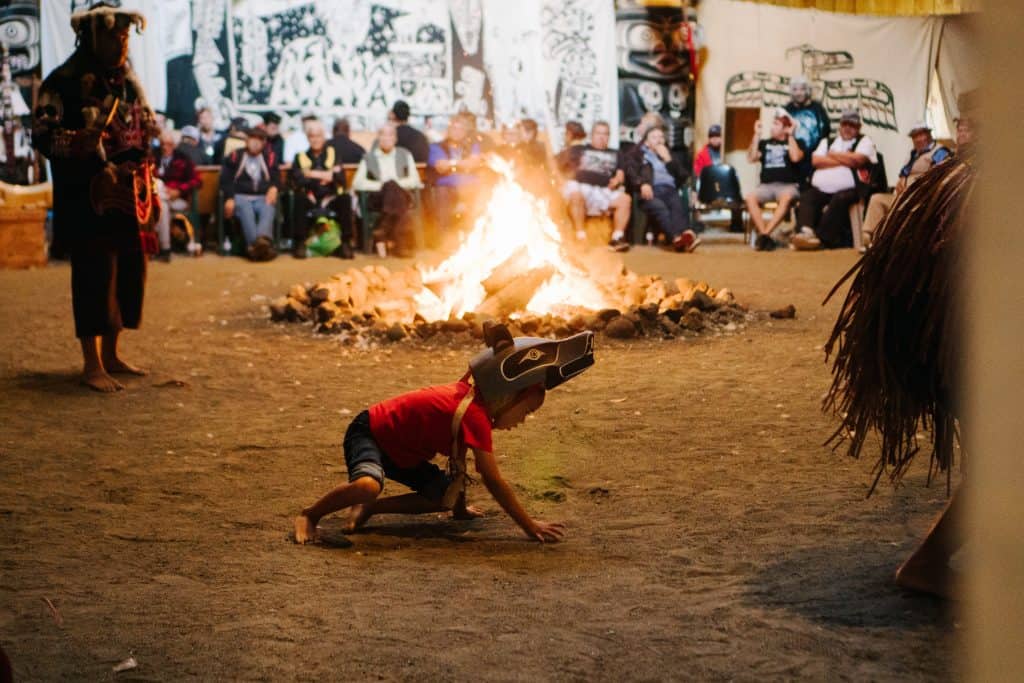 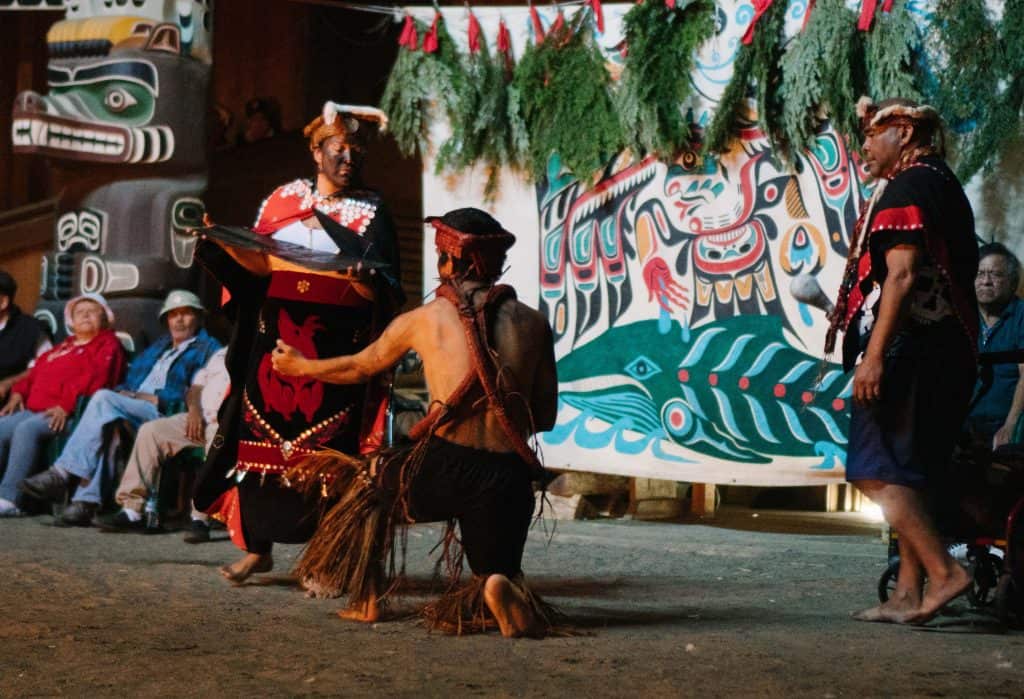 In the summer of 2020, Cecil planned a visit to the Museum to spend some time with some original paintings in the collection.  They were painted by his relative, and former mentor, Allen James.  James passed away in 1978, but Cecil remembered that we had a large collection of his works, and he wanted to learn more from his former mentor by studying them.  It was during this visit, that Cecil casually mentioned that he would like to do a show of his work at the Museum.  This was early Covid times, and we had recently scrapped our entire exhibit schedule for the next couple of years, so we had time to explore this idea.

I took a trip down to visit Cecil in Port Alberni, where he lives.  It being Covid times, we met outside at a park by the river, and spent the day getting to know one another, sharing stories of our families and our histories. Then Cecil showed me some of the many public artworks he has done in Port Alberni.  We spent only a very small amount of our time that day talking about what an exhibit at the Museum could look like. From there, the exhibit slowly took form, through several more visits, recorded interviews, weekly phone conversations, and our shared reactions to the world as it changed over the past year and a half.

Most of the exhibitions I have curated in my time at the Museum (since 2013) have been focused on the stories of those who lived long ago. I have referenced interviews recorded previously, in many cases before I was born, original documents and photographs preserved in the archives, and artifacts carefully kept in the Museum’s storage room. In some cases, I have been privileged to work with contemporary artists and community members to record and share their memories and display their artworks as a part of a larger story; however, I have never before had the gift of time that the development of this exhibit allowed. Not just the extended time I was able to spend with Cecil, but also the time that came before, the long standing relationship between his family and the Museum. It has made this experience, and the exhibit that is a product of that, all the richer.

As Cecil has said, “It’s been a long journey from going to that lecture in the Museum at Campbell River to being here, owning a lot of these dances, and fully understanding it, and taking ownership of it, and preserving it.  I think this show will be a celebration of all that…  Maybe this time I’ll be doing a lecture, not attending one.”

Cecil Dawson: Standing in the Gap will be on display at the Museum from March 6 until November 6, 2022.

Written by Museum at Campbell River Curator Beth Boyce, this article first appeared in the March 2022 edition of Musings, the Museum’s newsletter. 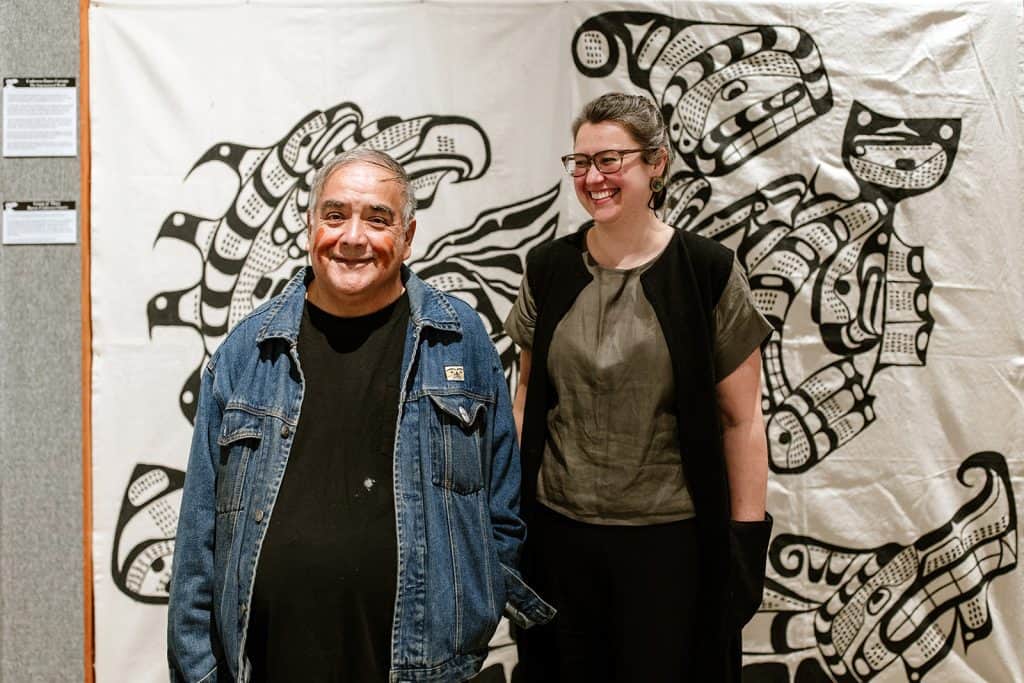 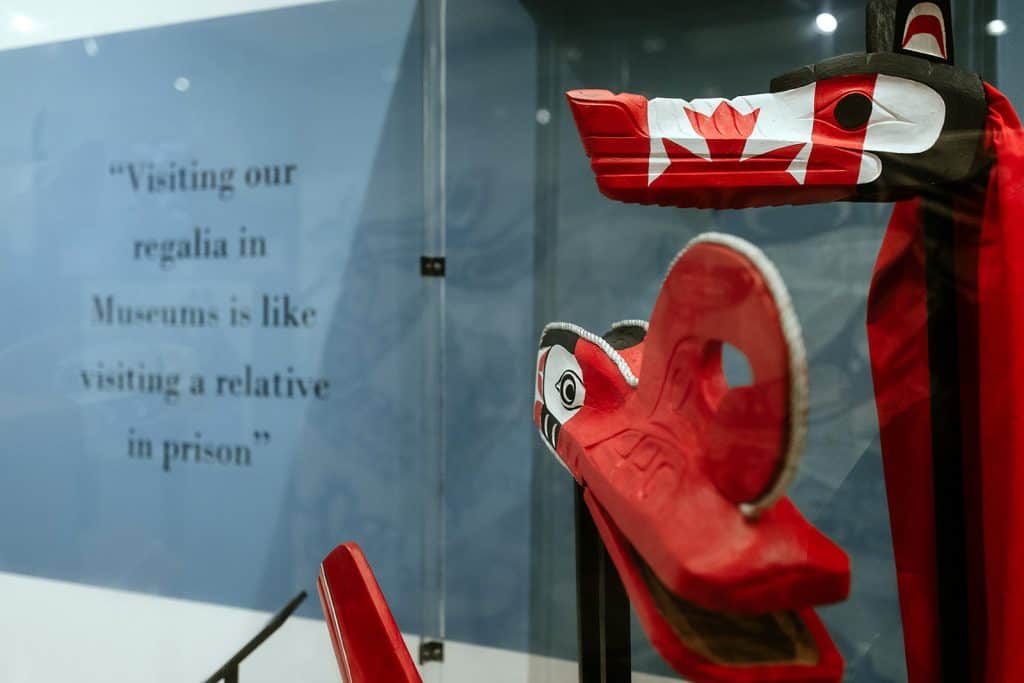 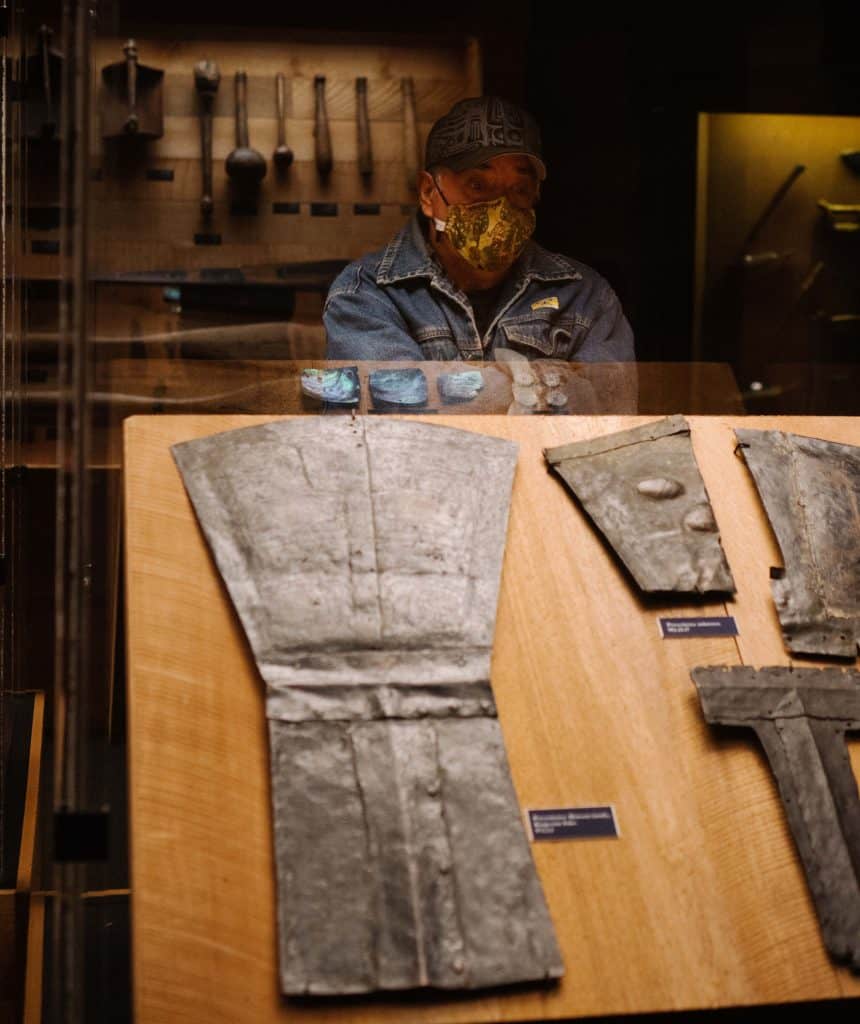 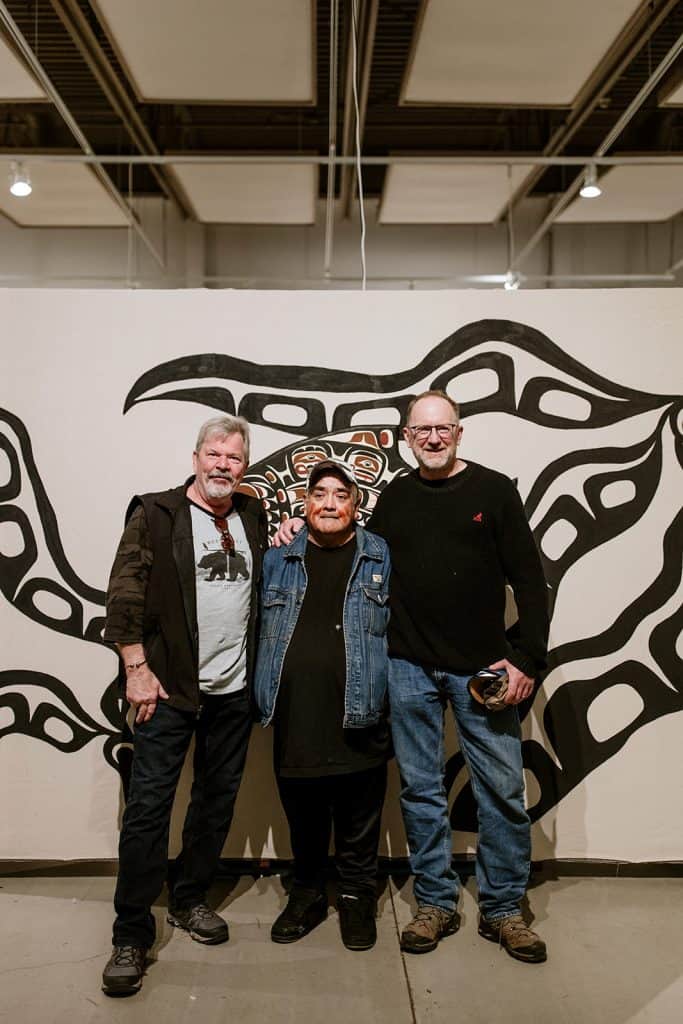 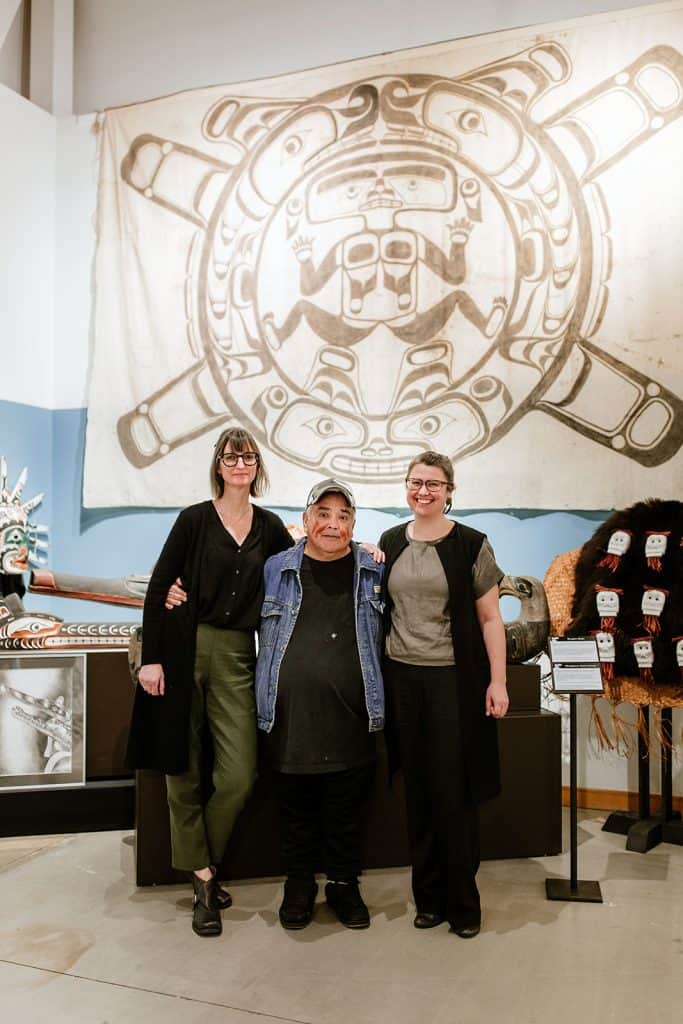 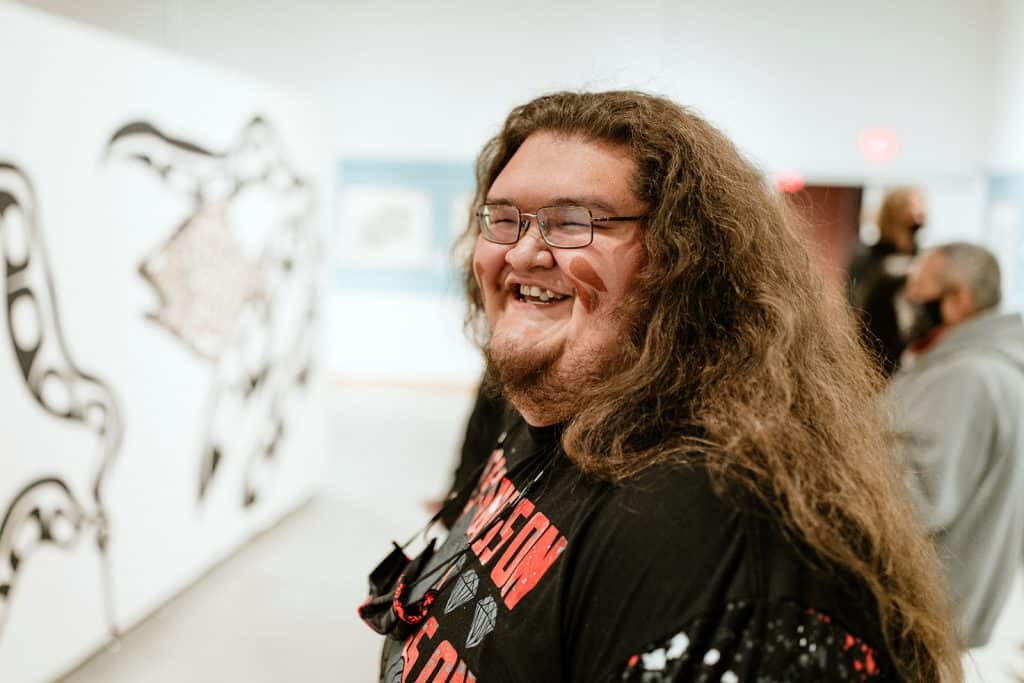 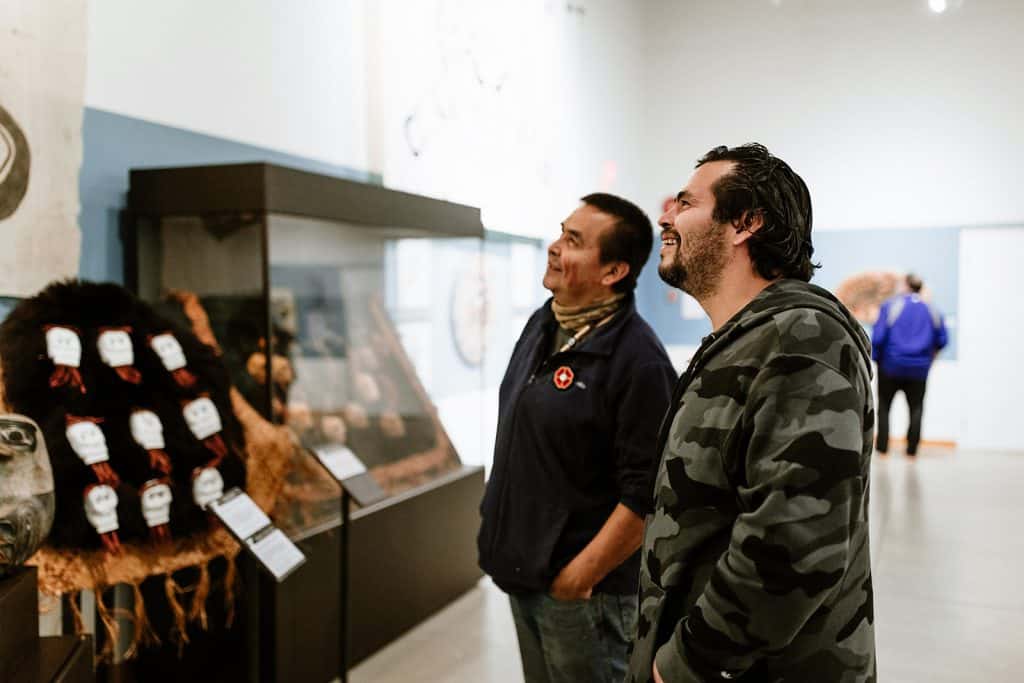 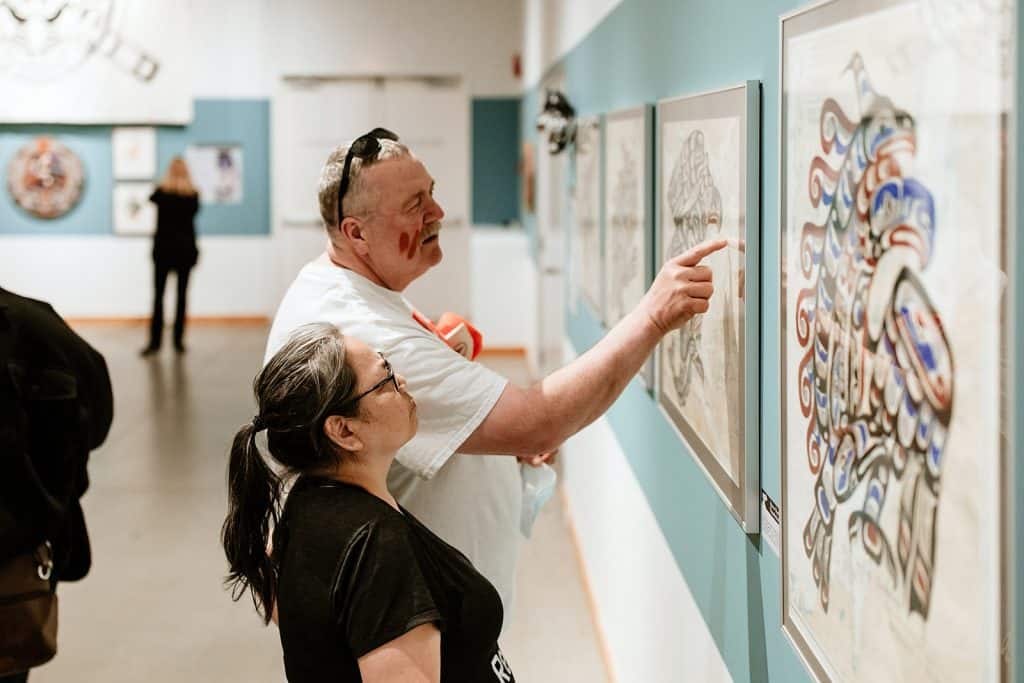 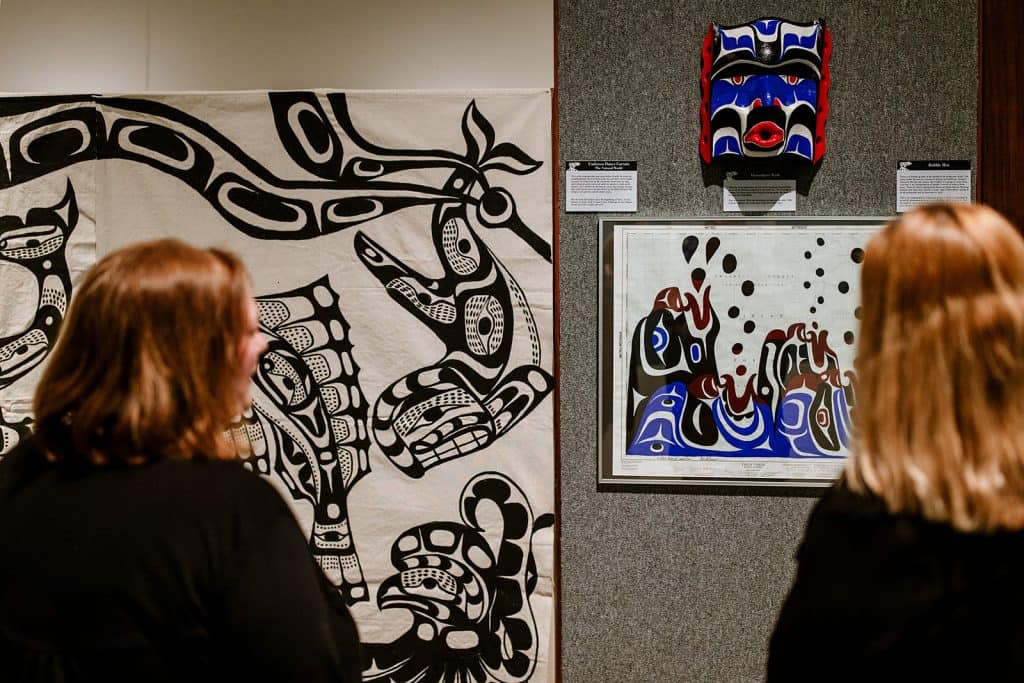 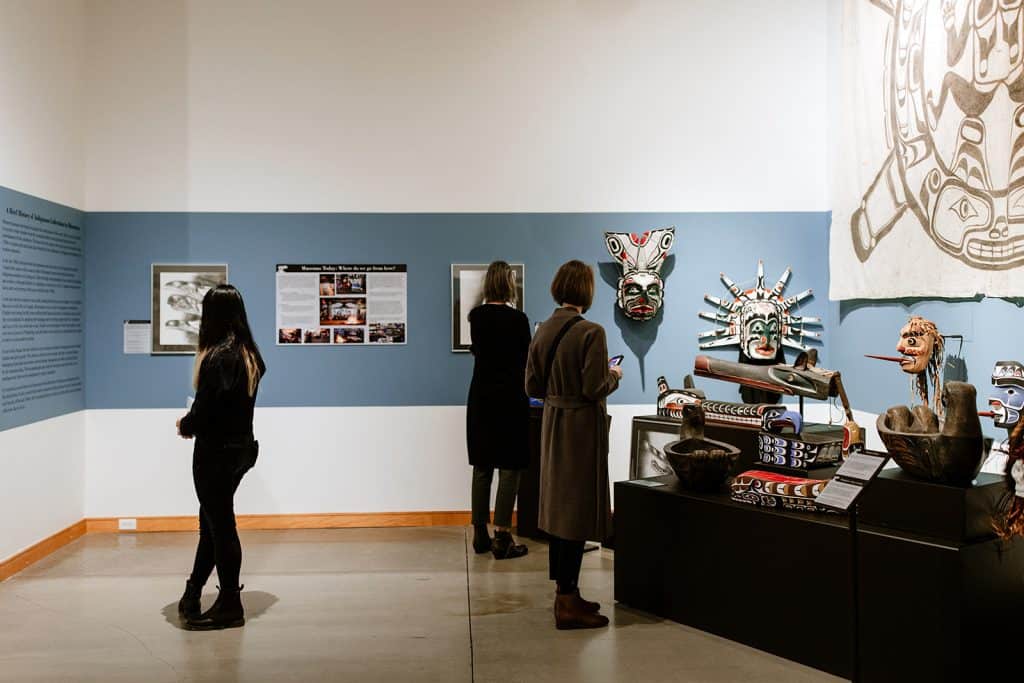 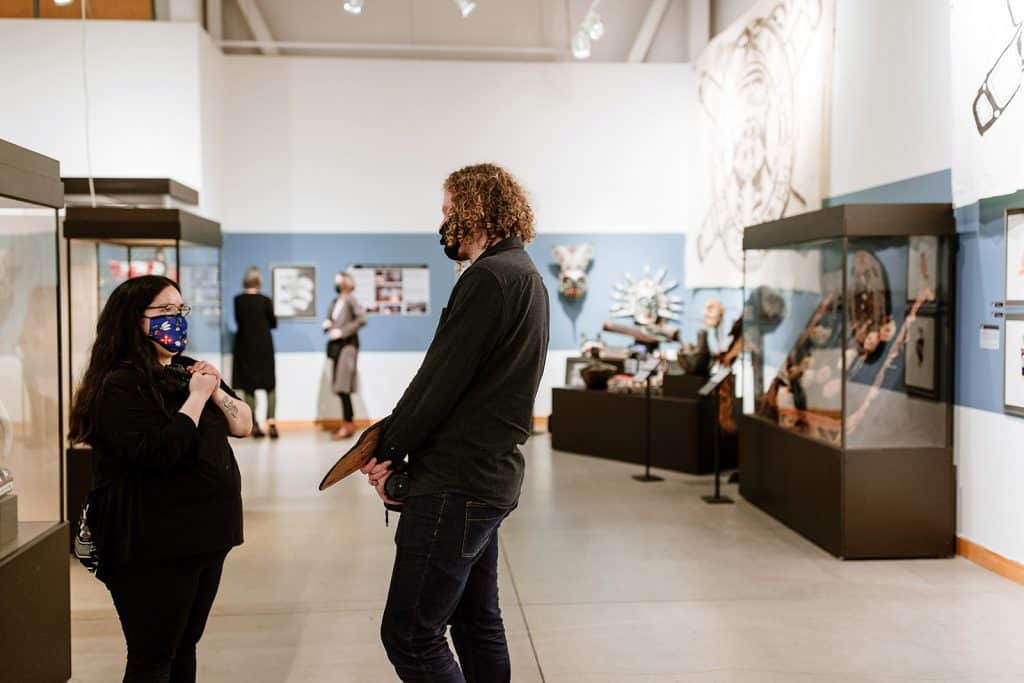 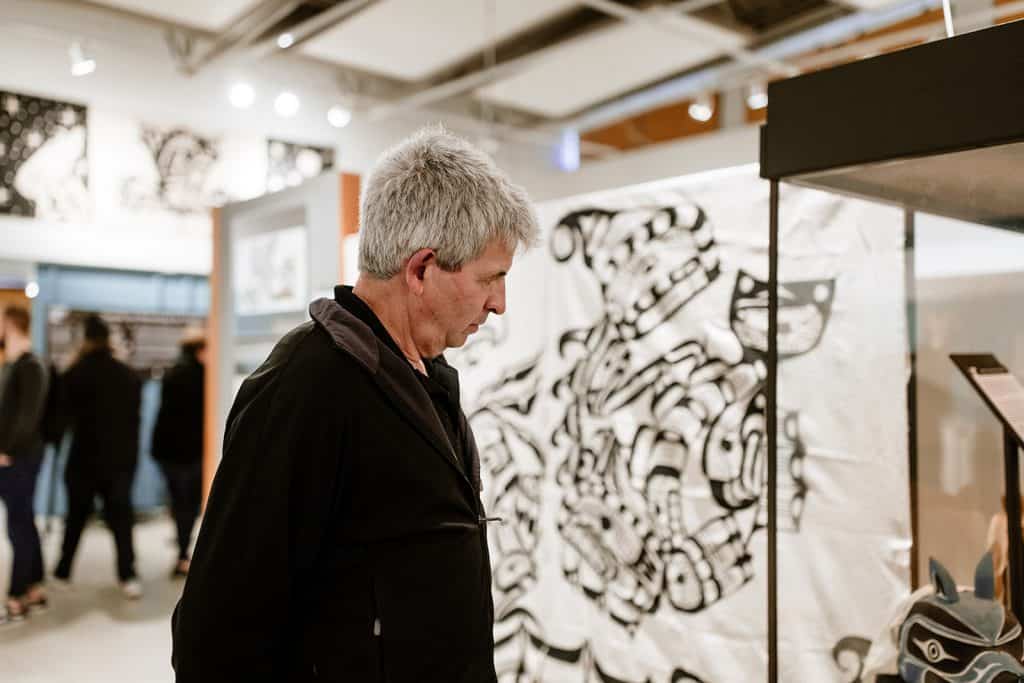